While the name Cunningham, Merce Cunningham (1918–1992), might sound familiar – as an American contemporary dancer and choreographer – we may wonder why.

A new documentary and biopic, Cunningham (2019) (Director- Alla Kovgan), thoughtfully explores Merce Cunningham career, which spans from the 1940s to the 1990s, through archival footage and wondrously filmed recent performances – notably two stunning set recreations of dance sequences Summerspace and Rainforest. As a pioneer in modern dance, the dancer and choreographer and dance company leader, employed innovative and abstract dance movements. To many observers, early in his career, his work might have seemed idiosyncratic but over time it was regarded as mesmerizing and groundbreaking.

His dance company was formed in the early 1950’s while he was in residency at the famously progressive Black Mountain College (North Carolina); the college closed in the late 1950s. Cunningham used a non-representational approach to dance, that is, dance movement and process were tantamount. Narrative and emotional context were less important in his work. And the work often relied on change elements or spontaneous procedures (randomized use of I Ching hexagrams) to inform and guide the sequences of his dance performances

During his many years, Cunningham maintained a collaborative, or interactive, relationship with many visual artists, designers, musicians, and musical composers. Most notable collaborations were with artists Robert Rauschenberg, Roy Lichtenstein, and Andy Warhol; designer David Tudor; and Avant Garde composer, John Cage (his life partner).
++++++++++

Another outstanding documentary, on modern dance, is director Wim Wenders’ 2011 film Pina. The documentary explores the work of German choreographer Pina Bausch (1940-2009) who was active with her Tanztheater Wuppertal Pina Bausch dance company from the 1970s until her death in 2009. Bausch’s contemporary work is a synthesis of modern dance and theatre.

Her work boldly explored many narrative themes with strong emotional context, most notably relationship between people; often male/female interactions. An element of repetition, or repetitive actions, is frequently an important component of her work. 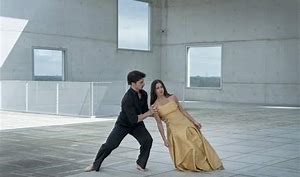 The documentary film features members of the dance company discussing their experiences and their impressions of their participation within Tanztheater Wuppertal, as well as, strikingly staged – indoor and outdoor – dance sequences.

Bausch most famous work, is the moody meditative piece Café Müller. A short segment of Café Müller was featured in the Pedro Almodóvar’s 2002 film, Talk to Her. The movie was instrumental in presenting Bausch’s work to broad international audience.