It is with a certain amount of optimism, levelled with a bit of nervousness, that we normally entered into any new endeavor. Specifically, starting a new job. As I have relocated, recently, from the Pacific Northwest, back to the southwest, my home, I look forward to the orientation process with a new job.

The first few day, or few weeks, of any new job generally consists of Human Resources activities, introductions to your new co-workers, and one-on-one or group training on your specific job duties and tasks. With much excitement, and a little trepidation, I hope to navigate this process, as many of us have, with much diligence. 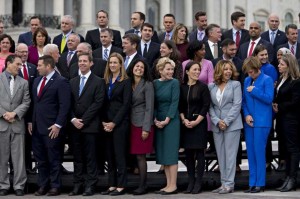 It was interesting to currently follow the orientation process for new members of Congress, especially newly elected members of the US House of Representatives. As most Americans are already aware, this 116th house will be the most diverse in US history. The approximately 90 newly elected House officials, about 2/3 democrats, include a large percentage of women representatives, as well as, individuals with a varied range of ethnic, religious, and gender identity backgrounds.

The orientation for new members of congress, prior to their official start date in January 2019, minimally includes, as one might imagine: caucus gatherings and meetings with party leadership, training on congressional ethics and disclosure rules, and guidance for handling constituent requests. Obviously, caucus meetings are essential for new members to learn about party and/or congressional policies and processes. During the several weeks before the official start of the new January 2019 US legislative session, new members will jockey for positions and assignments for various congressional committees.

The program fosters bipartisan discussions on a wide range of congressional policy issues. The program provides practical specifics on setting up and staffing congressional offices, wise practices for interactions with media outlets; and balancing personal and professional life during their Washington DC tenure. And the program offers one, of perhaps a few opportunities, for new members, of different political parties, to interact professionally and socially in a neutral, non-partisan, zone.