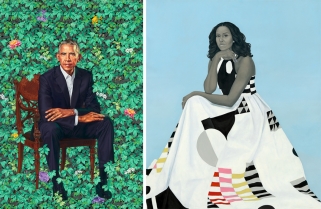 The unveiling of the recent official portraits of President Obama and the First Lady, for the National Portrait Gallery in Washington DC, has been cause for a vigorous discussion (goggle ‘official Obama portraits’). The First Lady’s portrait was painted by Amy Sherald, an artist residing in Baltimore MD, while the President’s portrait was painted by Kelinde Wiley who is based in New York City.

Amy Sherald is primarily known for portraiture work featuring African Americans. Her work can have social, cultural, and political nuances. She often uses gray-scale for skin tone in her paintings and she works with a color-field aesthetic (see my June 2016 column blog post); Color Field is a two-dimensional visual art form in which color becomes as important as the subject content.

Sherald’s use of strong fields of color, for the First Lady portrait, that is, a sky blue background, a gray skin tone of the subject, a regal flowing and mostly white dress, suggests strong emotional and mental depth. The First Lady’s facial quality is wistful and composed.

Other work by Amy Sherald: 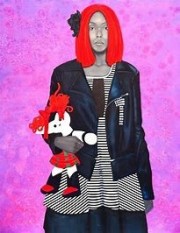 Kelinde Wiley practices in a variety of artistic mediums. His portraiture work primarily features African Americans who are placed in historical settings and/or with historical motifs (see my August 2017 column bog post). His portrait, of the president, has Obama seated in a sturdy chair, implying stability; and this is within a massive wall and carpet of green leaves; definitively suggesting a fertile vitality.

The President’s facial tone is one of strength and concern – perhaps prudent attributes for the current unsettled days of our republic.

Other work by Kelinde Wiley: